Action for Vision and Thought

Our laboratory studies eye movements to understand basic neural circuitry that moves the eyes for clear vision, and as a tool to probe mental processes that are distinctly human. Our ultimate goal is to understand the substrate of neurological function and dysfunction, leading to development of non-invasive diagnosis and therapy for brain trauma and psychiatric disorders. 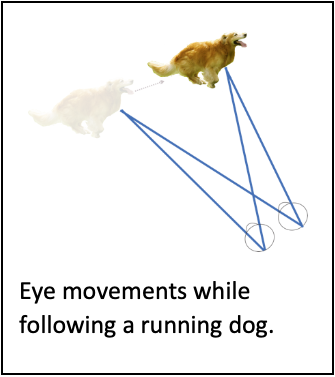 A single, static retina severely limits vision and perception- limitations that eye movements minimize. For starters, each retina “sees” ~120 deg, and both together see only ~210 degees since the eyes are roughly aligned. Eye (and head, and body) movements expand our field of view. But the retina limits vision in two other significant ways. First, high acuity vision is possible only with our tiny fovea (~4 deg). To view an entire scene at high resolution we almost continuously scan it with rapid, saccadic eye movements. Second, retinal circuitry that preprocess images before they enter the brain is sluggish, causing images to blur when they move on the retina. To preserve image clarity, vestibulo-ocular (VOR) and optokinetic (OKN) reflexes stabilize images subconsciously to compensate for self-motion, while smooth pursuit and fixation systems stabilize moving and stationary object images voluntarily. Our laboratory studies smooth pursuit, fixation and saccades.

Eye movements not only indicate what we see, but where and how we allocate our mental resources, and are therefore a sensitive, dynamic and objective readout of distinctly human thought processes. Furthermore, they are measured efficiently and non-invasively with relatively inexpensive, portable commercial devices, giving eye movement recording significant advantages over other neural imaging technologies.

Eye movements reveal bottom-up, reflexive attention allocation to sudden and salient events that our survival may depend upon. But they also indicate emotional states and numerous top-down, cognitive processes e.g. our perceptions, how we anticipate and predict, how we allocate attention and make decisions, areas our lab has contributed to. They read out high-level processes related to memory, planning, problem solving and face recognition, but our work shows they also reflect inattentive, subconscious mental processes.

Furthermore, eye movement recording has practical applications including aiding cockpit design, using gaze patterns of experts both to train novices and evaluate performance in tasks including surgery, clinical diagnosis, sports, airplane inspection, and driving. They also elucidate what people find interesting in advertising and other media - we have contributed here showing they indicate interesting frames for video summarization.